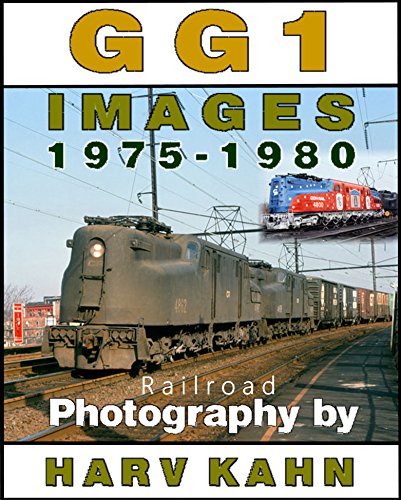 This edition of Harv Kahn's railroad photography is focused on the electric-powered GG1 locomotives, from the years 1975-1980. Included, are 149 large images of GG1s, from various locations in the Northeast corridor, and in various paint schemes, and road names: Pennsylvania, Penn Central, Amtrak, Conrail and NJDOT. This is a picture-book, to be viewed in the horizontal view. A caption is located under each photograph, describing the location , date, and locomotive numbers. Featured, in one of the chapters, are several images of no. 4800–"Old Rivets"– the first GG1 to be built in 1934, and later to be enamored in a lively bicentennial paint scheme, in 1976. It's also pictured in Conrail-blue. Other chapters contain images of the PRR GG1 4935–NRHS dedication, rare images of inside the Wilmington workshops, action at North Elizabeth, NJ, Waverly yard, South Amboy, Meadows yard, Sunnyside, nighttime photography of GG1s, the famous no. 4876, and many more. You'll also see a sequential photo-series at South Amboy, NJ, where the GG1s routinely swapped with E8 diesel locomotives. One of the GG1s in this series is no.4876, which was famous for crashing into Washington D.C., Union Station, in 1953–days before the inauguration of President Dwight D. Eisenhower. After the celebration, ole 4876 was taken apart, rebuilt, and put into operation again. A more-detailed account is in the South Amboy chapter. This unique volume will capture the attention of fans of the electric GG1 locomotive. Harv Kahn brings us something new to the catalog of GG1 images. His style of photography was about capturing the raw essence of a railroad scene. He was up close and personal with the GG1's as if he was an employee with access to the yard areas and even in the shops. The late, great, Harv Kahn lives on in these iconic images of the greatest electric locomotive to run on rails. With his camera he captured the glory of that time, and the feel of railroading on the Northeast coast. Hop on board this GG1-time-machine, and take a trip back to the 1975-1980-era with the GG1. Those yeas represented the last great chapter for the glorious, giant, GG1's–locomotives that had been built in the era of steam engines. Here is a book for every rail fan, with plenty of pleasing railroad scenes of these giant electric locomotives.