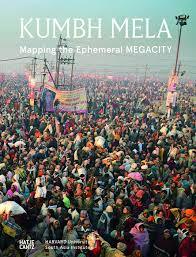 Many people are not familiar with Kumbh Mela, and yet it is the largest celebration on earth: depending on the positions of Jupiter, the sun and the moon, Hindus travel to certain places along holy rivers, the Ganges for example, to bathe and cleanse themselves of sin. With a 2013 attendance of approximately 34 million, the triennial pilgrimage requires that the communities hosting the gatherings create functioning temporary structures to transport, house and feed enormous crowds of people.
In 2013, a team from Harvard University monitored the large-scale event from its preparation through to the actual celebration, investigating and documenting the prototypes for flexible urban planning and offering organizers advice on issues around environmental protection. This substantial hardcover presents their comprehensive research findings along with city maps, aerial images and photographs of this most fascinating feat of urban planning